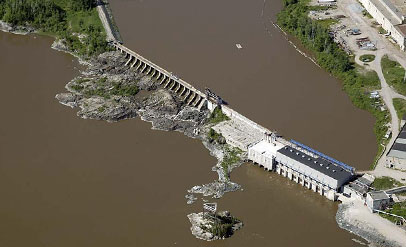 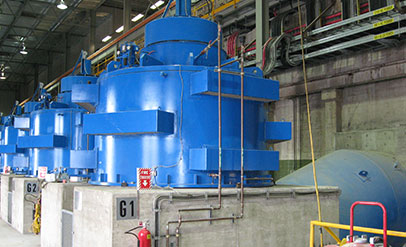 The Iroquois Falls Generating Station is a twelve-unit hydroelectric station located on the Abitibi River in Teefy Township.

The original powerhouse was completed in 1914 with fourteen turbines, where ten turbines drove pulp grinders and four turbines were configured to drive electric generators. The station was reconfigured in 1946, where all fourteen turbines were reconfigured to drive electric generators for a capacity of 20 MW. In 2002-2004, the station was redeveloped to provide nine new Kaplan turbines and three of the remaining units were refurbished, resulting in a total capacity of 29.7 MW at a head of 13 meters.

Located downstream of the confluence of the Abitibi and Black Rivers, the station is a run-of-river plant with small storage capacity. Operation pertaining to levels and flow are governed under the Abitibi River Water Management Plan. The site is restricted by a maximum water elevation due to flood constraints and a year round minimum elevation to respect fisheries and navigational constraints. Operation is constrained by an instantaneous minimum flow of 56.6 m3/s at all times.

The Iroquois Falls station consists of a powerhouse, a concrete gravity section containing the spillway, sluice gates, and an earth section. Units 1 to 9 are provided with two head gates transferred to the required intake via a monorail hoist. There are four sluice gates on the spillway. Sluice gate #1 is a screw operated motorized gate, while sluice gates #2, 3 and 4 are hydraulically operated. In addition, there are fourteen bays of stop logs, which are handled by mechanical lifters. The head pond operates between the minimum elevation of 247.6 meters and maximum elevation of 247.85 meters.

Iroquois Falls is connected to the existing Hydro One 230kV circuit A931 and connects to Ansonville TS.