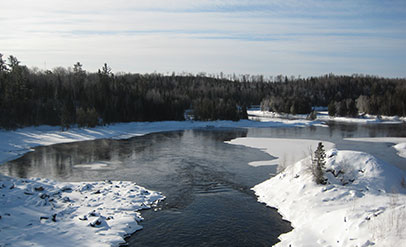 The Sturgeon Falls Generating Station is a two-unit hydroelectric station located on the Seine River approximated 90 km east of the town of Fort Frances.

Located 90 km east of the town of Fort Frances, the station is a run-of-river plant. Operation pertaining to levels and flow are governed under the Seine River Water Management Plan. The plan specifies the rule curve elevations and flow requirements for the Seine River, including storage dam operations at Raft Lake which is the primary storage point on the river. The station is subject to a minimum flow of 2.5 m3/s at all times, and an instantaneous minimum flow of 10 m3/s during the period from April 15th to June 15th.

The Sturgeon Falls station consists of a powerhouse and a concrete gravity section containing the spillway. Each generating unit is provided with two head gates, which are operated by an electrical screw hoist. There is a sluice gate and fifteen bays of stop logs on the spillway, and a hydraulic log lifter for log handling. The head pond operates between the minimum elevation of 357.2 meters and maximum elevation of 357.75 meters.

Sturgeon Falls is connected to the IESO grid on circuit M1S.