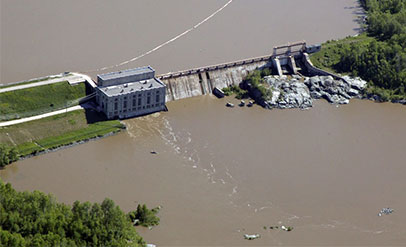 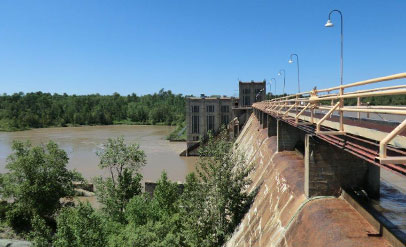 The Twin Falls Generating Station is a five-unit hydroelectric station located on the Abitibi River.

The station was built in 1922, all five generators rewound between 1982 and 1992 to increase capacity, switch gear modernized in 1999, and controls modernized in 2009. The original turbine runners were replaced in 2012 after 90 years of service. The station presently has an installed capacity of 27.5 MW at a gross head of 17 meters.

Located east of the town of Iroquois Falls in Teefy Township, the station serves as a peaking station and controls the discharge of Lake Abitibi. Twin Falls regulates the water levels and flow from Lake Abitibi. Operations pertaining to levels and flows are governed under the Abitibi River Water Management Plan.

The site is restricted by a maximum water elevation due to flood constraints and a summer minimum elevation to respect navigational constraints. Operation of the station is coordinated with Iroquois Falls GS downstream, which is constrained by a 56.6 m3/s minimum flow limit.

The Twin Falls station consists of a powerhouse, a concrete gravity section containing the spillway, sluice gates, and an earth section. Each generating unit is provided with two head gates, which are operated by a common shaft hoist. There are 2 sluice gates on the spillway, and each gate is powered by a screw-operated motorized drive train. The head pond operates between the minimum elevation of 262.92 meters and maximum elevation of 265.39 meters. The summer operating range minimum is 263.7 meters.

Twin Falls is connected to the existing Hydro One 230kV circuit A93I and connects to Ansonville TS.